MUSICWORKS: LOCAL AND GLOBAL ARTS EDUCATION
"Lest it seem that trumpet electronics are strictly an avant-garde preoccupation, consider the emergence of players like Jesse Neuman, who often traffics in a deep-lyrical mode".
-Nate Chinen

"Even without the [live electronic] effects, Jesse is an incredible musician. His sense of melody is so strong,
he can play anything and make it sound beautiful. And he has such a great sense of what effects to use, when and how, that he never ceases to amaze me.   -Pete Robbins 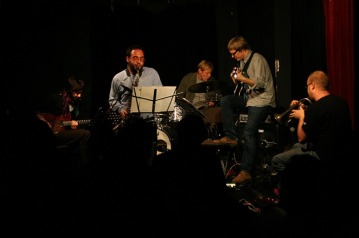 Altoist Pete Robbins' Do The Hate Laugh Shimmy functions like a treatise on synthesis, where disparate influences are not so much juxtaposed as woven together with style and grace. This CD makes a clear statement that these are times that celebrate a storied history of musical innovation. What felt like a gradual exploration of evolving alternatives in the 20th Century is now reaching a level of refinement, where today's innovators are synthesizing the work of predecessors who had done the same themselves. While this is clearly a jazz record through and through, this is a form of jazz that's created by someone who came up listening to popular music of his day—and at this point, that means guitar-based rock music from the 1990s. Some of the more contemporary influences that are listed on Robbins' bio include glitch-based 500th-generation sound artists like The Books or Autechre and art rock like Deerhoof and Dirty Projectors.   Eclecticism is often used to create a sense of over-saturation, but here, the interaction of contrasting influences never gives the listener the sense of dizziness that often results from more stark juxtaposition. Robbins has created music where his instrumental virtuosity and that of his constituents serves as a focal point and binding agent. This gives sustainability and depth to the music, creating a unified beauty that seamlessly integrates a feeling of familiarity with a wide array of unlikely stylistic inflections.
-By Wilbur MacKenzie, All About Jazz

It is in such times that I cannot help but be saddened by the absence of the great singer, late Nusrat Fateh Ali Khan. It may have been 10 years since his untimely death, but for those of us who were enraptured by his musical genius, it seems just like yesterday. Thankfully, his memory has been kept alive by countless musicians and non-musicians alike, and it is these people to whom we owe much gratitude. In this day and age, music can do, and has done, a great service to the cause of peace, unity and harmony. But it is indeed a pleasant surprise when the ones who carry the torch forward do not understand the language the song is sung in.  This is what enthralled me most the first time I went to see the Brooklyn Qawwali Party (BQP) perform in late 2005. None of the 14 or so band members understood Urdu, or for that matter, the taal and raags being used, yet they still managed to keep the essence of Nusrat’s music alive as they played their string, percussion and wind instruments with fervour and enthusiasm that night many months ago.  As I sat in the audience and listened to trumpeter Jesse Neuman introduce the group at their CD release party a few nights ago, I was humbled and elated. Here were some regular, all-American folks who happened to listen to his music and have now become not only diehard fans, but also propagators of Nusrat’s noble message.“We are honoured to be able to bring Nusrat’s music to you; music that is centuries old and that, we hope, will live on for centuries to come,” Jesse said to a crowd full of people.  Nusrat sang of love for God, for the beloved and for humanity around us. He has touched the lives of millions all over the world. I remember growing up listening to his music and watching countless foreigners, who could not understand a word of what he sang, yet they were in a deep trance and understood that something so compelling could only take one to a higher plane of existence. As BQP’s music makes its way into the hearts of thousands of New Yorkers, one can only marvel at the fantastic job the group is doing to bring the richness of Sufism and Pakistani music to mainstream America. We in South Asia are quite familiar with this heritage, but what to say of those who are only familiar with images of terror suspects? I am honoured that in a post-9/11 world where Pakistanis aim to build alliances and relationships with the rest of the US, they have allies and partners that are doing just as good a job as any ambassador can.          (by Zeeshan Suhail) 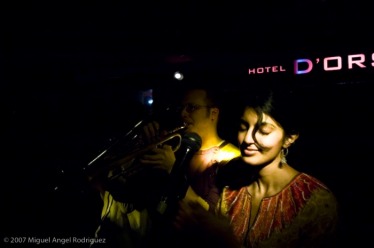 “Seep is a record that begs to be listened to over and over so the experience of being totally swept away can be repeated. When you listen to KAASH, you enter a world that is not only musical, but also philosophical, spiritual, meditative and sensuous. A fascinating mix and intertwining of East and West.”
-All About Jazz

".....Kaash took the stage with band members that represented the fusion of these musics. Jesse Neuman not only played trumpet inside the two styles, but used various electronic effects sensitively and in the service of the music, helping to create a floating feel, while Dan Fabricatore's bass playing tread the line between the repetitive nature of the music and the drive needed for the Western infusion. Isabel Pupo-Walker was outstanding playing various percussion instruments that came from Latin music, but which had their sounds and rhythms molded to be in close coordination with Jain, whose drumming constantly drifted back and forth between West and East, when he was not using a laptop for effect. Tabla was not missed.